The Danish Film Institute is currently digitising the entire surviving treasure trove of Danish silent films, and those of us working with the revival of this heritage are constantly prompted to ask the question: how can these old films best be presented and communicated to new audiences in 2021?

An obvious answer is to adopt a historical perspective: the films provide unique insight into what interested and captivated large audiences a hundred years ago. But things only become truly interesting for the many when the burning issues of the past feel entirely relevant today; when we can connect the conflicts played out in the old silent films to our present day – and perhaps grow a little wiser about the problems besetting people in the past and present alike. Here we delve into the film series about ‘The White Slave Trade’, asking how 100-year-old silent films can shed light on questions about consensual sex, rape myths and the heroization of women who actively speak out against abuse?

From 1907 to 1912, no less than six Danish feature films were produced about the phenomenon known as ‘the white slave trade’. In spite of boasting high-octane car chases and happy endings, the films were presented as realistic and morally edifying stories warning young women against a supposedly real phenomenon which was a source of great public concern in Denmark around the turn of the century – what we now call ‘trafficking’. The newspapers printed reams of gruesome stories about women, often from the lower classes, being lured abroad in the belief that they were to serve as housekeepers or become famous singers, only to actually end up in insalubrious brothels. Only few were lucky enough to return home unscathed.

In fact, Denmark and Scandinavia were, to say the least, not major supplier of women to such nefarious schemes. But that did not stop the booming Danish film industry from exploiting the heady mixture of curiosity and fear that the subject aroused in the audience.

It can hardly come as a shock to anyone – or even motivate legitimate critique – that old films can seem hopelessly old-fashioned and at times cringe-worthily reactionary. However, in the case of the ‘White Slave Trade’ films, one could actually argue the exact opposite, namely that the films have certain aspects which point to modern-day thinking. One example is the basic premise that a socially disadvantaged position increases the risk of being sexually abused, a point of view entirely in line with today’s #metoo debate. In The White Slave Trade III, also known as The House of Ill Repute (1912), the heroine Nina makes a living as a singer with a variety theatre, but her hopes of extending her contract vanish when she rejects the theatre director’s demands for sexual services – a situation sadly familiar to too many women in the entertainment industry today. Please see film clip 1.

In a way, the heroines of the slave trade films are often modern, active women who set out into the world to support their families. Regrettably, the stories then tend to present them as eventually needing to be rescued by a man who escorts them home to their worried parents and, as a reward, wins the heroine’s heart, but this is a point we will leave aside for the time being.

For there is one particular area which prompts the heroines to display unusually great decisiveness and powers of action: their struggle to remain virgins. To put it bluntly, they refuse to be raped. The programme accompanying The White Slave Trade (Fotorama, 1910) describes it in these terms: ‘The little woman who will not sacrifice her virtue as a contribution to the upkeep of the “Lord’s Mansion”’. The other women in the brothel, whose back stories we audiences are not made party to, do not seem to have much of a problem with contributing to its upkeep – they even seem quite happy with the situation. Please see film clip 2 from the competing studio Nordisk Film’s plagiarised version of The White Slave Trade (Nordisk Films Kompagni, 1910).

In the same film the audience are shown exactly how hard the heroine struggles when she is visited by her first customer. He chases her around the room, but she eventually succeeds in overpowering him with a stranglehold, causing him to lose consciousness. She then proceeds to faint herself. Please see film clip 3.

For a subsequent film, In the Hands of Impostors (1911), the question of what a woman must do to avoid rape is once again described quite eloquently in the film’s programme: ‘But when he approaches her, leering and grasping, she pushes him back violently – she would rather die than voluntarily become his!’

Most people will probably agree that sexual intercourse cannot be described as voluntary when one party is held captive and even starved in the kidnapper’s efforts to get her to do his bidding. But the films appear to present the question of being raped or not as a matter of choice on the woman’s part.

Concerning consent and myths about rape

We love stories of strong women who stand up against abuse – these are important narratives that engender hope and strengthen our belief that we ourselves will be able to speak out in a similar situation. But what if the same stories reaffirm an old myth claiming that women who are subjected to abuse are themselves at fault?

The idea that rape is only rape if the woman has fought against it tooth and nail is a notion with a long history in popular culture and even in medical science. In a book on ‘Sexual Hygiene’ (the exact year of publication is unknown) – a textbook extensively used in Denmark in the 1940s and ‘50s, and written by a chief physician specialising gynaecology and obstetrics – it is asserted that:

Nature has protected woman against unseemly familiarity, intrusion and fornication against her will by placing the entrance of the vagina in the best hidden and best protected place on her body. (…) A woman’s allegations of having been raped should be met with the utmost scepticism. It is practically impossible to have intercourse with a woman who resists forcefully.1

Today, we have a more nuanced understanding of the nature of abuse and rape. It is becoming common knowledge that the vast majority of rape victims ‘freeze’ – become immobilised by fear – rather than put up a physical fight. The new rape laws in Denmark take this into account by requiring explicit consent prior to sexual intercourse, but this is still a new outlook on sexual abuse. Here we can use fiction to understand the myths about rape that have, for centuries now, shaped and influenced the cultural perception of sexual abuse – and ask where and how such outlooks still exists today.

1. Quoted from the Danish at http://ungeguiderne.dk/detvarengangseksualoplysning/

I In The White Slave Trade III (1912), the heroine Nina makes a living as a singer with a variety theatre, but her hopes of extending her contract vanish when she rejects the theatre director’s demands for sexual services – a situation sadly familiar to too many women in the entertainment industry today. Danish intertitles.

In The White Slave Trade (Nordisk Film, 1910) the other women in the brothel, do not seem to have much of a problem with contributing to its upkeep – they even seem quite happy with the situation. Danish intertitles.

In The White Slave Trade (Nordisk Film, 1910) the audience are shown exactly how hard the heroine struggles when she is visited by her first customer. Danish intertitles.

The films about "The White Slave Trade" 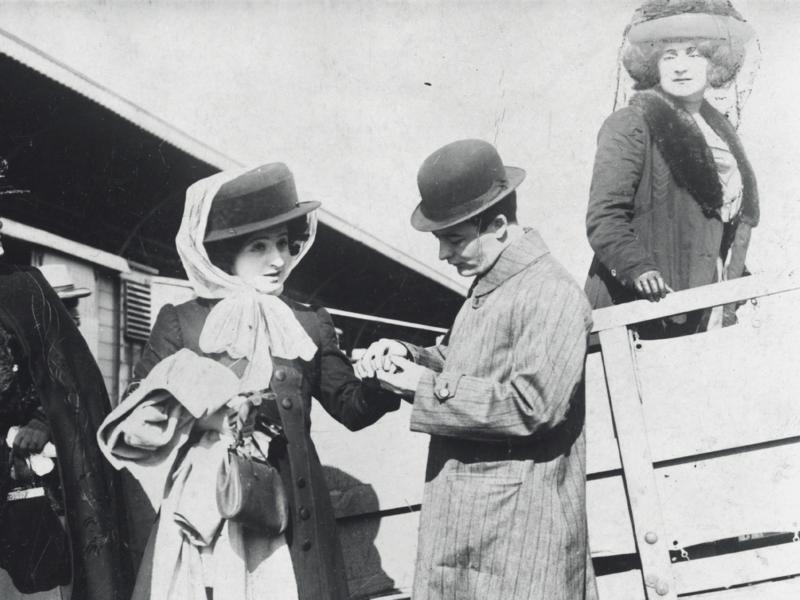 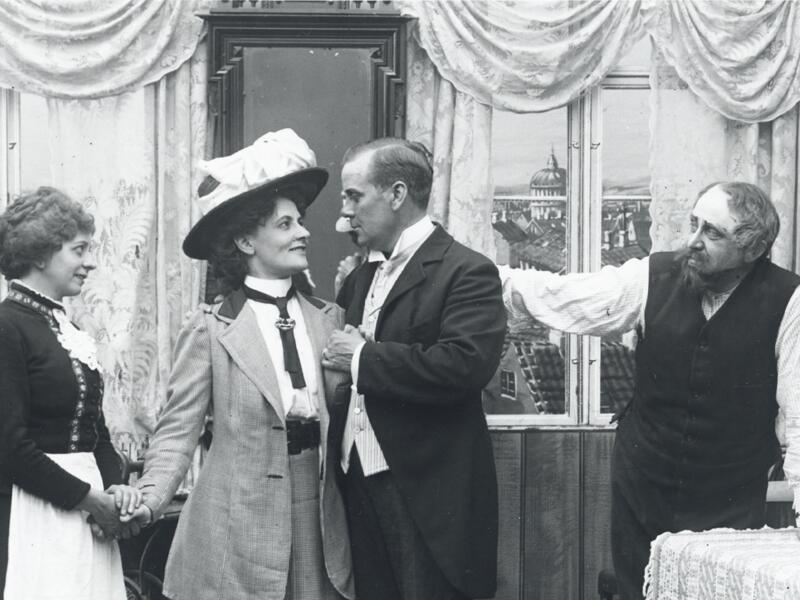 The Escape of the Slave Traders

Unknown, Fotorama.
Not preserved.
See the film's program in The Danish Film Database. 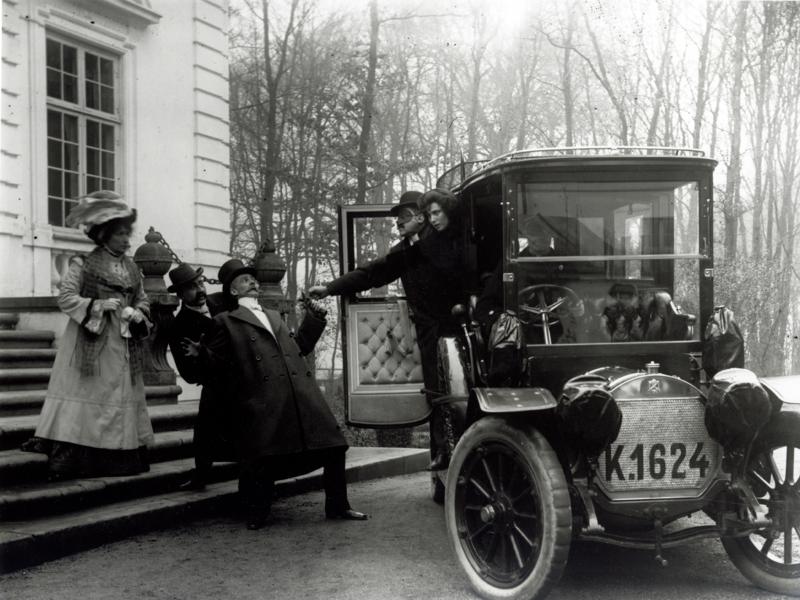 In the Hands of Imposters 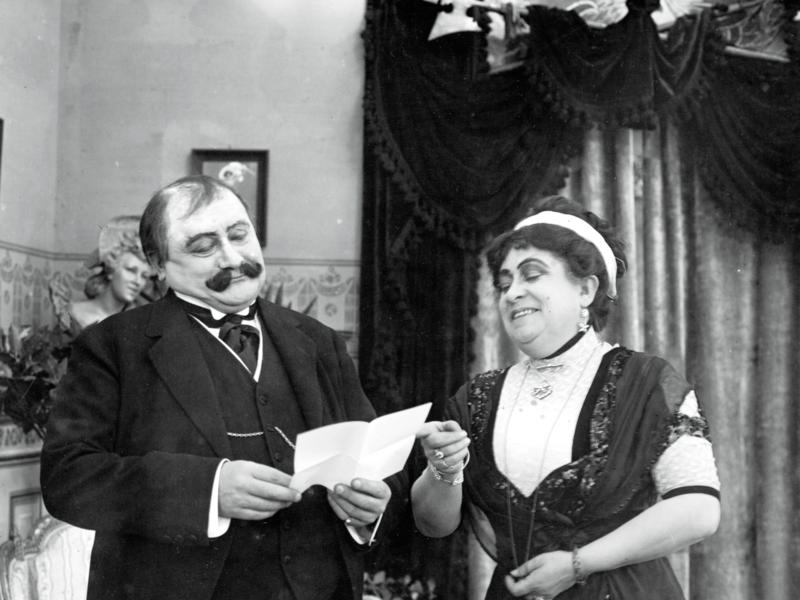